Jacks is a 3 year old thoroughbred gelding that came to see us in November 2019 after he pulled up lame with swelling along his cannon bone following a very impressive win locally. Jacks was examined and had an ultrasound of his right forelimb tendons, the ultrasound showed a tear to 75% of his superficial digital flexor tendon (SDFT), a bowed tendon as it more commonly known. This tear involved almost the entire length of the tendon.
At NREVC we have had a lot of success with a product called autologous conditioned serum (ACS). ACS is processed from the horses own blood which involves turning on specific pro-healing factors and turning off pro-inflammatory factors, it also induces specific growth factors to stimulate regeneration of damage tissue. ACS has no added products which also means that ACS has the added benefit of having no swab time. Due to ACS ability to reduce inflammation, it is commonly used to treat early stages of arthritis, tendon injuries and even problem broodmares. This was prepared by Equine Blood Solutions Victoria in Kyabram and under ultrasound guidance Kath injected into the large hole in the tendon. Jacks then followed a very strict custom made rehabilitation program which involved box rest and hand walking.
As per the rehab program, a follow up ultrasound was undertaken 3 months later with very impressive results! In the two images below you can still see some changes within the SDFT but majority of the black hole has filled in with scar tissue. After this ultrasound Jacks was able to spend some time in the paddock and exercise was increased to slightly longer periods of hand walking as well as some light jogging. He also wears ice boots on both legs after exercise and has tailored farrier treatment to ensure correct hoof balance. The ACS is administered during the initial phase directly into the injured tendon, it is then given intravenously throughout the rehab program.
It is very important to adhere to the rehab program to ensure the best outcome for Jacks. A follow up ultrasound will be performed in May before increasing his exercise further.
Cross section ultrasound image of injury to superficial digital flexor tendon. 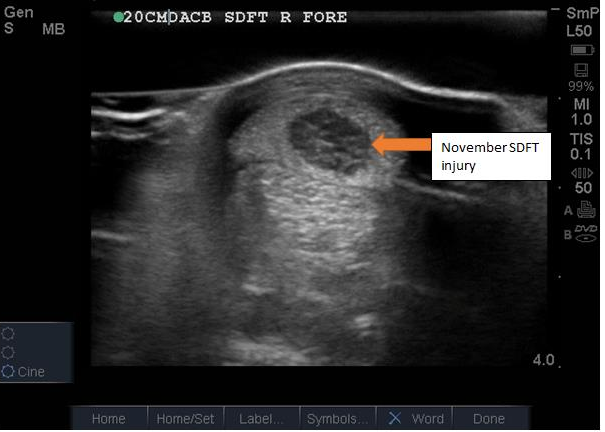 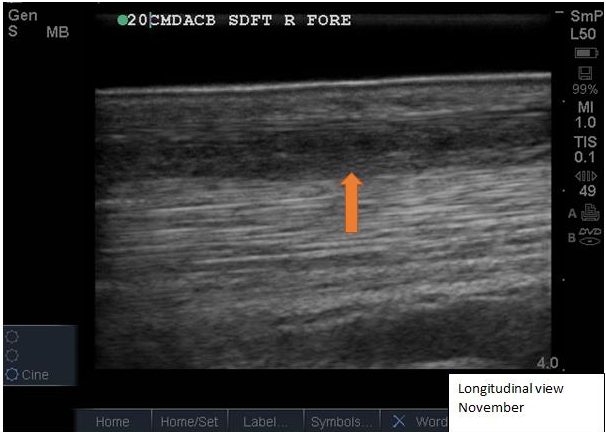 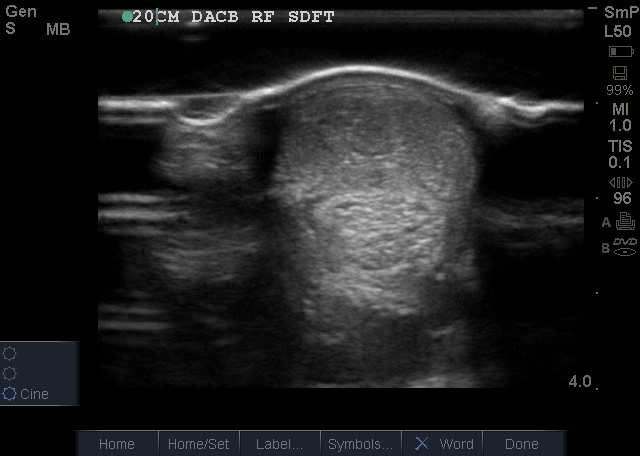 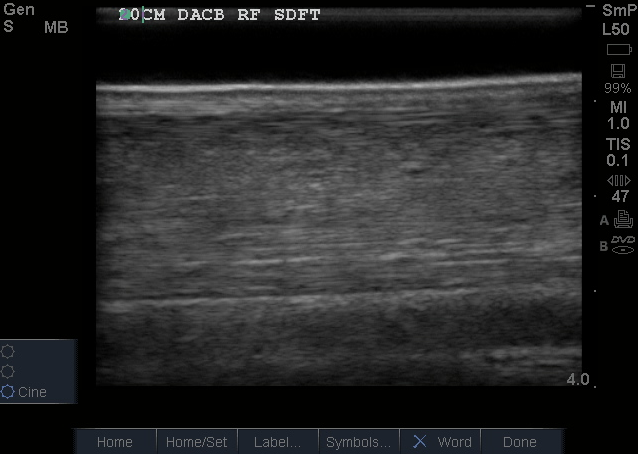