Two weeks ago a 3 year old, Riding Pony gelding presented for blood in his urine during exercise. He was otherwise bright in himself, eating and drinking well, but does sometimes strain to urinate. Our initial approach at the clinic was to perform a full clinical examination of the pony, including examining the penis and sheath for any injuries or growths. This examination was normal and no abnormalities were noted on the penis or in the sheath. A fresh urine sample was obtained and the urine was rose colored on collection. A blood sample was taken and both this and the urine were sent for analysis.
The blood results showed no evidence of infection and the analysis of the urine showed large numbers of calcium carbonate crystals (which are a normal finding in low numbers in horse urine) and increased blood, but no bacteria. These findings make a traumatic cause more likely than a urinary tract infection, particularly with the history of blood seen after exercise. The advice to the owner was to perform a rectal exam of the pony and ultrasound examination of the bladder. This was performed the following week and a 5cm bladder stone was detected both by palpating it in the bladder and on the ultrasound (see picture). Surgical removal of the stones is the preferred method and is successful with a low rate of recurrence.
Bladder stones, or urolithiasis, is an uncommon and sporadic condition in horses. Male horses are more likely to develop stones but there is no breed or age predisposition. Calcium carbonate crystals are found in normal horse urine and can build up in high amounts. There is a mucus coating in horse bladders that is thought to slow the formation of these stones and when this is affected that is when the stones can form. Common signs can include difficulty urinating with straining either during or after, and/or urine scalding of the hind legs. Other signs include blood in the urine, low grade colic-like symptoms, and longer than normal periods of extruding the penis.
The risks associated with stone formation are predominantly traumatic, for example damage to the wall of the bladder which is responsible for the blood-tinged urine. More importantly with male horses is if the stone breaks up into smaller pieces and is excreted there is a high risk of it getting stuck part way and requiring emergency surgery to prevent rupture of the bladder. As such it is important to make a definitive diagnosis when symptoms are noted to allow appropriate therapy to be commenced. 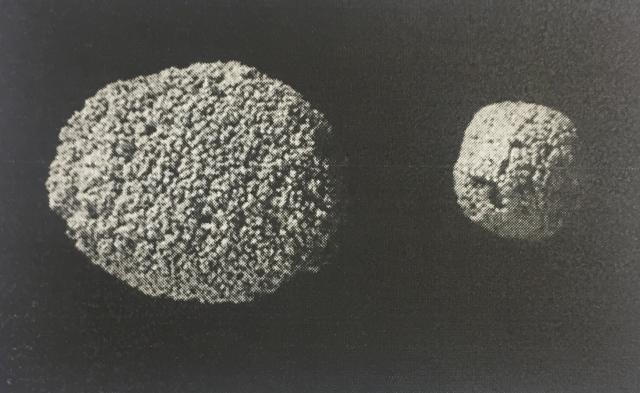 This is an ultrasound image of the bladder stone. The bright white line is the edge of the stone.