The image we shared recently and below, shows the light from the endoscope within Puzzle’s sinus illuminating through the bone overlying her sinus! Keep reading for an overview of the case: Puzzle is a 28 year old, Australian Stock Horse mare who presented to us for a foul smelling, intermittent nasal discharge. Puzzle’s very dedicated owner has been trying for over a year to resolve this issue with numerous unsuccessful treatments. Puzzle came into the clinic where we were able to perform an upper respiratory endoscope, this showed the problem was within her nasal passage. In the rostral maxillary sinus there was a large white, productive mass which you can see in the images we took using the endoscope. We also took x-ray images of Puzzle’s skull to pinpoint exactly where the mass was and what it was effecting. We took samples of this mass which were sent to the lab for cytology, culture & sensitivity. 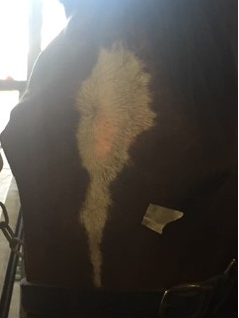 Endoscopic image of the mass within the sinus. 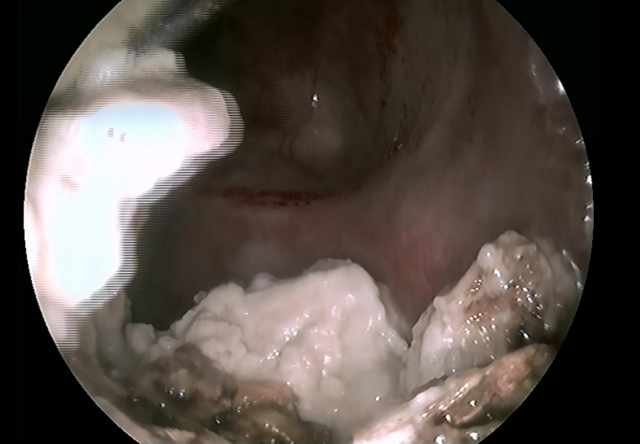 X-ray image of Puzzle’s head with the endoscope in place (thick white line), the mass is marked with the star. 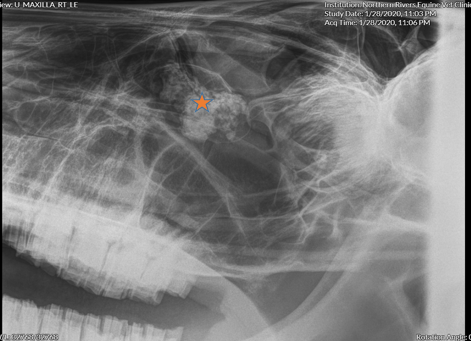 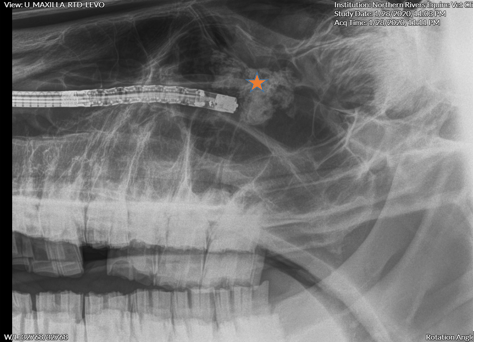 Following the results of samples that were taken, Puzzle was started on antibiotics prior to surgery to reduce the size of the mass. We re-scoped the sinus which showed the mass had reduced in size but still remained. Under heavy sedation, with local anaesthetic blocks in place, we trephined her sinus, this involves drilling a hole through the bone. This allows good visualisation and treatment of the issue directly at the site. It was curetted and thoroughly flushed to remove all the debris and pus/infection to reveal to our surprise a calcified mass! These masses form in areas where there has been a chronic infection and over time a calcified mass is produced, these are very firm almost like bone. Using the hole we had previously made, we removed the mass using long forceps and again flushed the site. We then simply sutured the skin back together over the hole in the bone. With heavy pain relief and anti-inflammatories on board as well as ongoing antibiotics Puzzle made a full recovery. Now that the mass has been removed the source of infection is gone and Puzzle shouldn’t be bothered by it any longer. 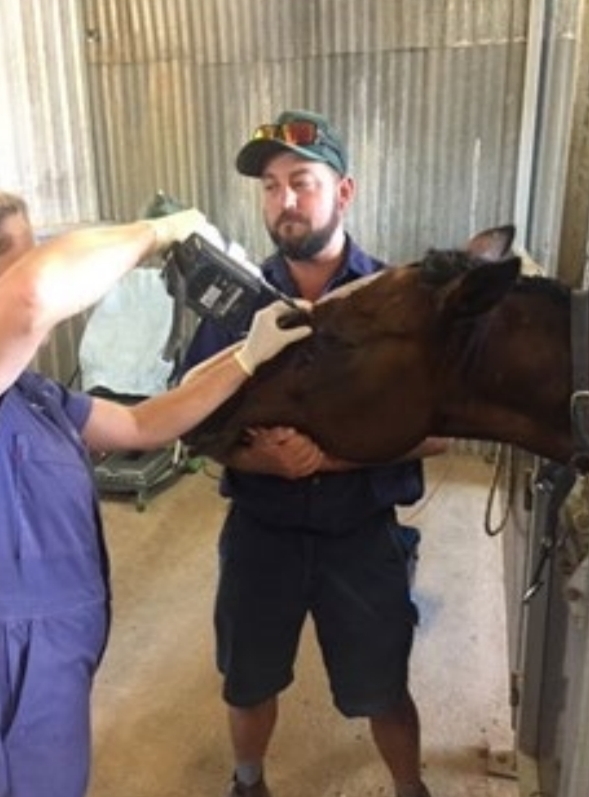 Curretting through the hole into the sinus. 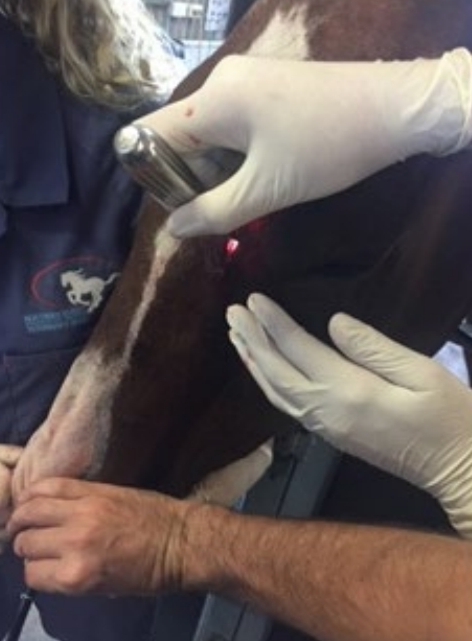 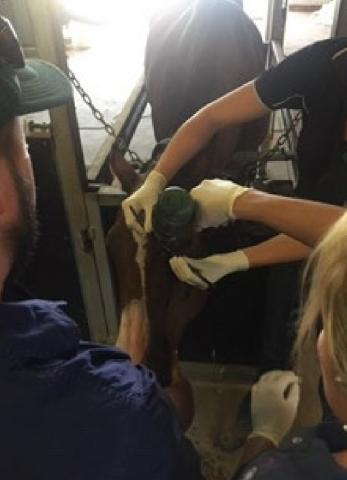 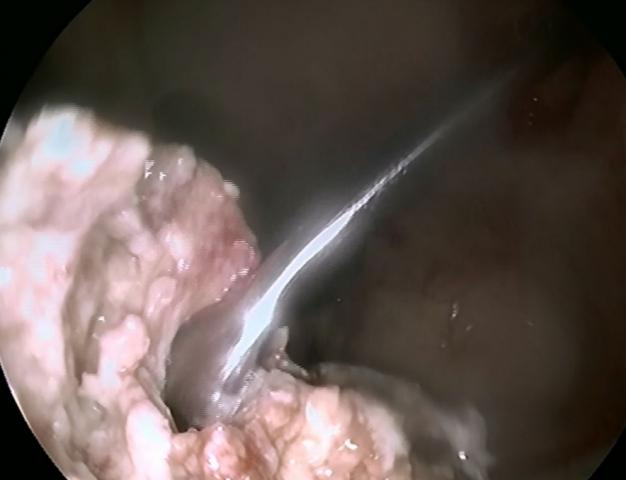 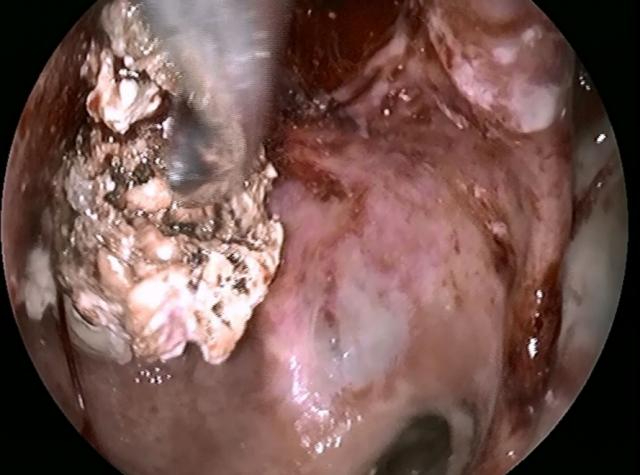 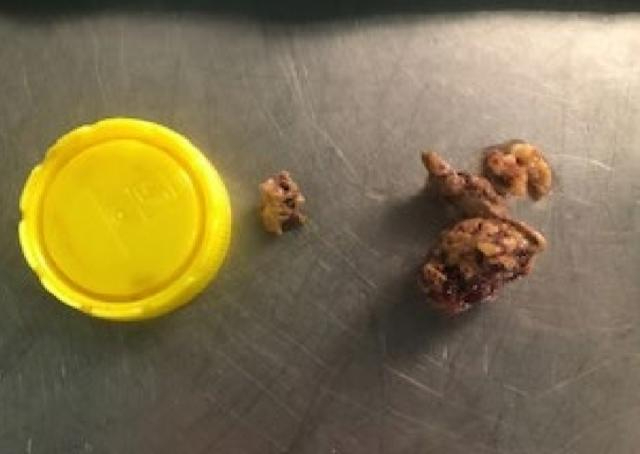